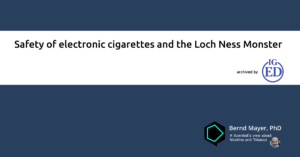 This is the famous “Surgeon’s Photograph,” showing a monster that allegedly lives in the lake Loch Ness in Scotland and is often cheerfully called by its nickname, Nessie. Despite this picture and several pretended sightings, there is no genuine evidence for the existence of Nessie. The scientific community considers the monster as a modern-day myth and explains sightings as misidentifications of more mundane objects, hoaxes, or wishful thinking (for more information see the comprehensive Wikipedia article).

However, absence of evidence is not necessarily evidence of absence. Nessie could be shy and immediately duck out of sight whenever someone comes close. You may argue it would have had no chance to hide from sonar scanning of the whole lake (what has indeed been done several times in the past). But possibly it resides in hidden caves in deep water. So we extend our search to sufficiently large underwater caves but still don’t find the monster. But without knowledge about its biology, we cannot exclude that Nessie is highly flexible and able to squeeze its way through
extremely tight, hardly detectable corridors. The monster even might be getting transparent under certain circumstances, further compromising its detection. In other
words, we cannot prove that the Loch Ness Monster does not exist. We can only state that
(i) there is no evidence for its existence, and that
(ii) its existence would be scientifically implausible (for several obvious reasons I don’t discuss here).

This example illustrates an important point: there is no “proof” in the empirical sciences. Mathematicians can prove a theorem, but dealing with the real world will never provide unshakeable truth. There are extremely well established laws of nature, such as the law of gravity or the laws of thermodynamics, but the transition from Newtonian physics to relativity and quantum mechanics shows that sometimes even established principles are replaced by better theories.

What evidence is required for declaring electronic cigarettes as “safe”?
Electronic cigarettes may be regarded as safe if users don’t experience toxic effects. Since millions of users haven’t suffered any damage so far, this criterion appears to be met. However, there could be subtle chronic effects that become apparent only after a while. To account for this possibility, health advocates ask for long-term studies. But what is “long” (1, 5, 10 or even 20 years?) and for what kind of effects should we look for?

Similarly to the search for the monster at plausible locations, we will likely study the occurrence of biologically plausible incidents, such as impaired function of the lungs, blood vessels, or the heart. But what about the hidden caves the monster may reside in? Long-term use of electronic cigarettes could affect physiological functions we had not considered. Through some unexpected, not well understood mechanisms vaping could cause an increased risk to develop a certain type of cancer, or enhance the severity of migraine attacks, or promote the appearance of pimples on the butt, any adverse effect you can think of.

Even if a long-term cohort study should reveal, let’s say a 2-fold increased risk for colon cancer after 20 years of vaping, a subsequent study may find an association between colon cancer and long-term banana consumption. Unfortunately, the study on electronic cigarettes was not controlled for this unexpected confounder (as epidemiologists call this type of annoying disrupting factors). So we have to start over again. In fact, anything we consume could have subtle harmful effects verifiable only in extensive studies. In case of bananas, we just don’t care.

Vaping could provoke a virtually infinite number of effects, which “cannot be excluded” as often said, theoretically requiring an infinite number of disproving studies. However, if I claim that  something happens, I have a responsibility to provide supporting evidence. Reversing the burden of proof by requesting others to refute my claim is a variant of the argument from ignorance, a popular anti-scientific tactic to distract from lacking evidence. Therefore, electronic cigarettes have to be considered as being safe in the absence of data suggesting harm, not the other way round.

Summary
I have deliberately chosen far-fetched examples to show that the approval of electronic cigarettes could be postponed forever by asking to wait until their safety is proven. There is no evidence for harmful effects of inhaling the vapor of liquids, consisting of propylene glycol, glycerol, nicotine and flavoring, going beyond the effects of other consumables, such as coffee, drinks or some foodstuff. In addition, based on current knowledge in physiology, pharmacology and toxicology there are no grounds for supposing that vaping could be particularly harmful. The monster was not
found, and its existence would be implausible.

There are conditions in which nicotine consumption should be kept to a minimum, e.g. serious cardiovascular diseases and, possibly, pregnancy. But individuals suffering from gout, high blood pressure or liver disease are recommended to reduce their consumption of meat, strongly salted food, or alcohol, respectively. Only very tough hardliners would call for a ban of these products, I suppose.