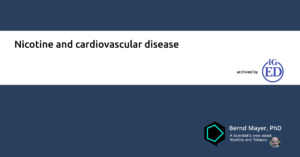 There are frequent warnings of adverse cardiovascular effects of nicotine, claiming nicotine may cause atherosclerosis leading to an enhanced risk of severe diseases, such as myocardial infarction or stroke. The harm caused by tobacco smoke is well established, but the contribution of nicotine to cardiovascular disease is less clear. In this post, I will try to explain the physiological regulation of cardiovascular function, describe the effects of nicotine and discuss the relevance of these effects with respect to human health.

Dealing with such a complex topic in a scientifically sound manner makes technical expressions unavoidable. I will do my best to make it simple, but as Albert Einstein said explanations should be as simple as possible, but not simpler. If you are not interested in the details, you may wish to go ahead and just read the fairly simple Summary at the end of the post.

The heart beats independently of innervation due to autonomous rhythmic depolarisation of pacemaker cells in the sinus node. Thus, hearts excised from laboratory animals start beating automatically if perfused with a buffered physiological solution containing nutrients and oxygen. However, cardiac output (i.e. the ejected blood volume per minute, determined by heart rate and contractility) is modulated by the autonomous nervous system, consisting of two branches that mediate opposing effects. Cardiac output is increased by activation of the sympathetic branch, leading to release of noradrenaline (norepinephrine), and decreased by activation of the parasympathetic branch, using acetylcholine as a transmitter.

The action of acetylcholine in the heart is mediated by muscarinic receptors, which do not bind nicotine. However, transmission of signals through the ganglia (upstream relay points) of both branches of the autonomous nervous system involves acetylcholine-induced activation of nicotinic receptors. Thus, nicotine can principally do both, either increase or decrease cardiac function. Although the sympathetic effects appear to prevail, this dual action may explain the high variability of clinical results (in addition to genetic polymorphisms that I may discuss in a later
post).

Nicotine administered as patch or chewing gum was shown to increase cardiac output of humans mainly through an acute increase in heart rate, without significant effects on contractility (see e.g. 1). Increased heart rate negatively affects blood supply to the heart (through shortening diastolic perfusion time) and causes an overall increase of cardiac workload and oxygen demand. However, the effect is relatively mild and transient.

The diameter of small arteries (vascular tone) determines peripheral resistance and, therefore, blood pressure. Nicotine modulates vascular tone through binding to nicotinic receptors in ganglia (see above), whereby sympathetic vasoconstriction appears to prevail. This leads to a slight acute increase in blood pressure, followed by a decrease due to chronic depressant effects of nicotine  2. Overall, the blood pressure response to nicotine is moderate and not particularly alarming 3.

In addition to sympathetic signaling, short-lived factors released from the endothelium, a monolayer of cells that covers the inner surface of blood vessels, have   major impact on vascular function. In particular nitric oxide (NO) is an endotheliumderived mediator that causes relaxation of the vessels and prevents adhesion of platelets to the vessel wall, resulting in decreased vascular resistance and thrombus formation, respectively. Dysfuntion of endothelial cells is considered as a cause for several cardiovascular diseases, including hypertension, peripheral artery disease, atherosclerosis, coronary artery disease, myocardial infarction and stroke 4 5.

Acute activation of endothelial nicotinic receptors may provoke NO synthesis and contribute to endothelium-dependent vasodilation 6 7. However, there are numerous studies unanimously demonstrating that chronic exposure to nicotine impairs the function of endothelial cells, presumably by decreasing NO biosynthesis. This has been shown with cultured human endothelial cells 8 9 10, laboratory animals 11 12, and humans 13 14. Thus, it is conceivable that long-term consumption of nicotine compromises endothelial function, leading to impaired vasorelaxation, atherosclerosis and thrombosis in humans. But is there clinical evidence that nicotine increases cardiovascular risk in humans?

There is no doubt that smoking is associated with considerably increased cardiovascular risk. However, nicotine is only one of the potential culprits in tobacco smoke and the risk associated with nicotine administration to humans has not been fully settled. An exhaustive review of the literature is beyond the scope of this article, so I will confine myself to summarizing a recent meta-analysis of studies on the cardiovascular safety of nicotine replacement therapy (NRT) as smoking cessation tool (assuming that the same holds for nicotine consumption using electronic cigarettes). In the Introduction to their 60-page landmark review on cardiovascular events associated with smoking cessation pharmacotherapies, Mills et al. summarize earlier studies as follows (reference numbers refer to the present blog article) 15:

When NRT first came onto the market, there were concerns in the literature and popular press about its safety profile with regard to cardiovascular events, particularly among users who continued to smoke 16. Clinical trials and laboratory research that followed indicated that NRT was safe even with a high-dose patch, combination NRT, and concurrent smoking 17 18 19.

The review [15] was aimed at comparing NRT with other pharmacotherapies. Besides therapies not discussed here (bupropion and varenicline), the authors evaluated 21 randomized placebo-controlled NRT studies and stratified the outcome according to the severity of symptoms. Cardiovascular death, non-fatal myocardial infarction and non-fatal stroke were defined as major adverse events, whereas increased heart rate (tachycardia), palpitation and non-specific chest pain were considered as less serious events.

Their meta-analysis revealed an elevated cardiovascular risk associated with NRT for less serious events but no evidence for major adverse events. But note that the variability of the data was extremely high, with a 95% confidence limit of the relative risk values ranging from 0.26 (4-fold decreased risk) to 4.3 (4-fold increased risk). From their data the authors arrive at the following conclusion:

Our findings indicate that there is no clear evidence of major CVD [cardiovascular disease] events associated with smoking cessation [pharmacotherapy]. The increase in nicotine replacement therapy-associated CVD events was driven by well-known and largely benign events such as tachycardia and palpitations.

Nicotine affects cardiovascular function mainly by activating the sympathetic nervous system, leading to increased heart rate and, possibly, constriction of peripheral blood vessels. These effects are mild and usually well tolerated. There is no convincing evidence that chronic administration of nicotine causes hypertension.

In addition to its effects on the autonomic nervous system, nicotine was shown to cause dysfunction of endothelial cells, a pathology considered as a key trigger of thrombotic events leading to serious cardiovascular events, such as myocardial infarction and stroke. However, randomized clinical studies did not provide evidence for a considerable cardiovascular risk associated with long-term nicotine administration.

Since nicotine therapy is recommended to smokers with high cardiovascular risk, there is no reason to question the benefit of switching from tobacco smoking to nicotine containing electronic cigarettes. However, variability of clinical data doesn’t allow to exclude a residual risk with certainty. If you wish to be on the safe side, complete avoidance of nicotine should be your choice.