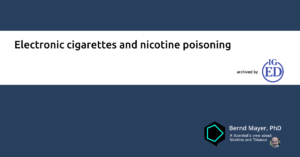 In view of the established toxic effects of nicotine, the widespread availability of nicotine containing liquids used to refill electronic cigarettes may pose a certain health risk, and even fatal outcomes of nicotine poisoning have been predicted by some public health advocates.

Here I won’t talk about deliberate misuse by e.g. intravenous injection of nicotine containing solutions in suicide or homicide attempts but focus on incidents that may occur in normal use. This includes overdosing nicotine by excessive consumption of liquids with high nicotine content, inadvertent swallowing of liquid, and spilling liquid on the skin.

The first symptoms are headache and dizziness, followed by nausea, vomiting and diarrhea, which appear upon severe overdosing, i.e. if the first symptoms are ignored. However, initial adverse effects will prompt vapers to stop and/or reduce the nicotine concentration of their liquids immediately. Thus, harmful or even fatal nicotine poisoning will not occur in normal use of electronic cigarettes.

An estimate of the nicotine dose that is lethal to humans is required to judge the possibility of fatal outcomes by accidental swallowing or spilling of liquids. However, nicotine sensitivity varies considerably among species, and obviously LD50 values cannot be determined for humans.

Therefore, the lethal dose has to be deduced from nicotine blood levels of documented cases of fatal or near-fatal cases of nicotine poisoning that are extremely rare. Evaluation of such cases recorded in the last 100 years or so suggests that 0.1-0.2 g of systemic nicotine be lethal for adults.

Considering the oral bioavailability of nicotine (20%, see my post on nicotine basics), 0.1-0.2 g systemic nicotine (applied by i.v. injection) corresponds to 0.5-1.0 g oral. I have suggested this value, which is 10- to 20-fold higher than the 50-mg dose that has been widely accepted for more than a century, in a recent publication 1.

Accordingly, drinking 25-50 ml of a liquid containing 20 mg of nicotine per ml could theoretically be lethal for an adult. However, the required volume would in fact be much higher, because vomiting and diarrhea will markedly reduce the amount of nicotine that becomes systemically available. Thus, even in the highly unlikely case of somebody swallowing a medium size bottle of liquid, the outcome will probably not be
fatal.

Obviously, the lethal dose for children is lower according to body weight, and childproof closure of liquid bottles is essential.

Poisoning by spilling liquid on the skin (dermal resorption)

The fraction of nicotine getting into the blood stream upon application on the skin is 70 – 100%, because the first pass effect limiting oral resorption is avoided (see the post on nicotine basics). Thus, the lethal dose of dermally applied nicotine would theoretically approach the dose estimated for intravenous injection (0.1-0.2 g), but the rate (kinetics) of resorption is an important  parameter that has to be considered.

Rapid metabolism and distribution of nicotine from the blood into other tissues prevent the build-up of critical blood levels if nicotine is resorbed slowly. Therefore, smokers tolerate the inhalation of nicotine doses over the day that would be lethal when given as a bolus. The kinetics of resorption is highly relevant for dermal exposure to nicotine, because the skin functions as a reservoir for slow release of nicotine into the bloodstream 2.

Detailed investigation of this issue using human skin as in vitro model 3 has revealed that resorption of nicotine is slow and dependent on the solvent (e.g. about 100-fold faster in water than in ethanol). In contrast to Fick’s law, the rate of resorption is maximal at medium concentrations (about 40%) and decreases at higher concentrations. Accordingly, the pure nicotine base is taken up extremely slowly. Based on the determined rate of 82 μg/cm2 x h one can calculate that application of pure nicotine to a skin area of 10 cm2 results in uptake of as little as 0.8 mg of nicotine per hour. Thus, short-term exposure of the skin to pure nicotine will not cause considerable adverse effects.

Exposure of 10 cm2 skin to a liquid containing 20% of nicotine (200 mg/ml) in ethanol would result in uptake of 0.1 mg nicotine per hour. At lower concentrations, which are typically used in the preparation of liquids for electronic cigarettes, dermal resorption of nicotine is negligible.

Nicotine containing liquids will not exert considerable adverse effects upon inhalation, spilling liquid on the skin, or accidental swallowing a few drops. Deliberate abuse or accessibility of the  liquids to children are associated with a health risk as are many other items of daily life.