The concept of the Total Harm Risk Metric (THRM) was born when I wanted to create the Gateway Matrix Model. It was obvious that I needed a simple way to evaluate the results from the model. So I devised it and I think that this concept will also work well with existing studies. It offers a single number to directly compare different statics. A number to say it all. The Big Picture.

This is part one of video poster #32 pres

ented at the Global Forum on Nicotine (GFN) 2019. The second part is Gateway Matrix Remodeled.

Whenever we hear about smoking and vaping statistics it’s always something like “The smoking rate has reached a record low, but vaping has increased by alarming xx %, which might re-normalize and be a gateway to smoking”--especially when adolescents are concerned. This apparent inability to scientifically assess the whole statistics seems to be a fathomless fount of fear, uncertainty, and doubt.

One possible way would be to identify significant behavioral pattern and assign relative risk factors, like the risks of physical harm for the individual, who keeps to the behavior for the rest of his life. This stipulation is of course a purely theoretical assumption, but it eliminates the uncertainties introduced by wild speculations on possible changes in the future. It should be relative to the most risky behavior (here: regular smoking, which would be at 100 percent).

With an eye to the requirements of a later development of a gateway matrix model, I have identified several distinct behaviors.

Among them vaping without nicotine is a special case, but for products with nicotine we should differentiate into the following two distinctive usage types: occasional (≤29 days of past 30 days) and regular (daily) use.

On the product side (including tobacco products and vaping products) we also have two groups, i.e. first “low risk” smokeless products and as the second, the “high risk” smoking.

Medium to high risk smokeless products would only be relevant where traditionally available (e.g. Indian gutka). The metric can easily be adapted to factor these in without disturbing the resulting metric number. It also might be sensible for the Scandinavian countries to assess snus separately from other smokeless products. 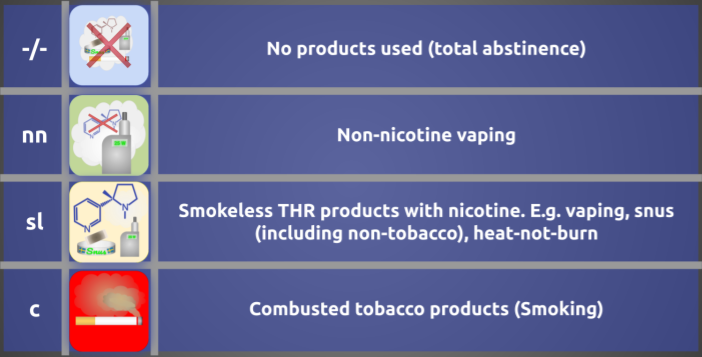 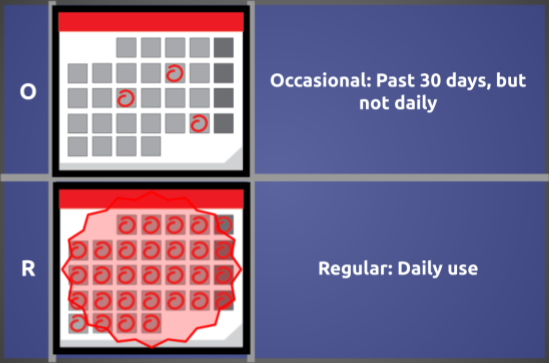 Risk factor is a guesstimate of long term physical health risks, if the user stays on this path. The numbers are chosen based on a mixture of experience, gut feeling, common sense, scientific estimates, and aesthetic reasons. 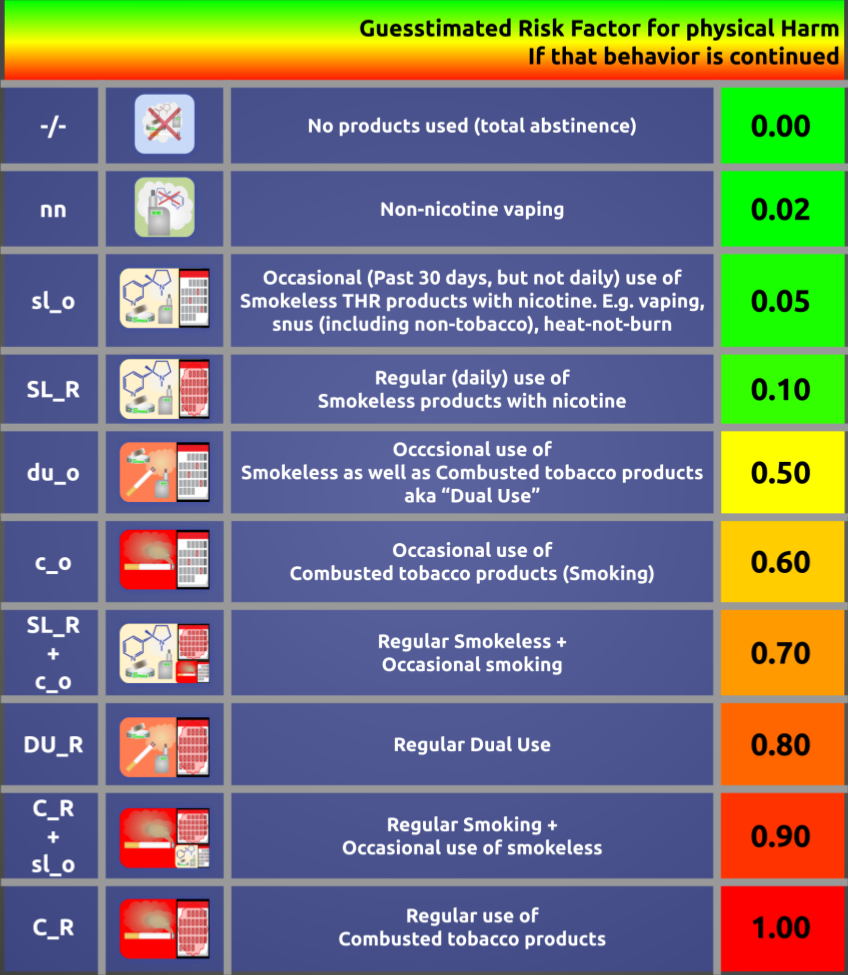 The reason for my relatively high guesstimate in smokeless is that I want to also count other smokeless THR products in here, that may have a slightly higher risk than vaping or snus. The ranking of the different combinations is based mainly on the well known self-titration of nicotine users, i.e. the nicotine the users gets from a lower risk source automatically reduces the amount of nicotine that will be consumed from a higher risk source.

I know there are many ways to improve on my simplistic approach and probably many more that I didn’t think of, but this example is just meant to demonstrate the concept. I’ll leave the statistical accuracy to professional scientists.

First calculate the percentages in the categories. 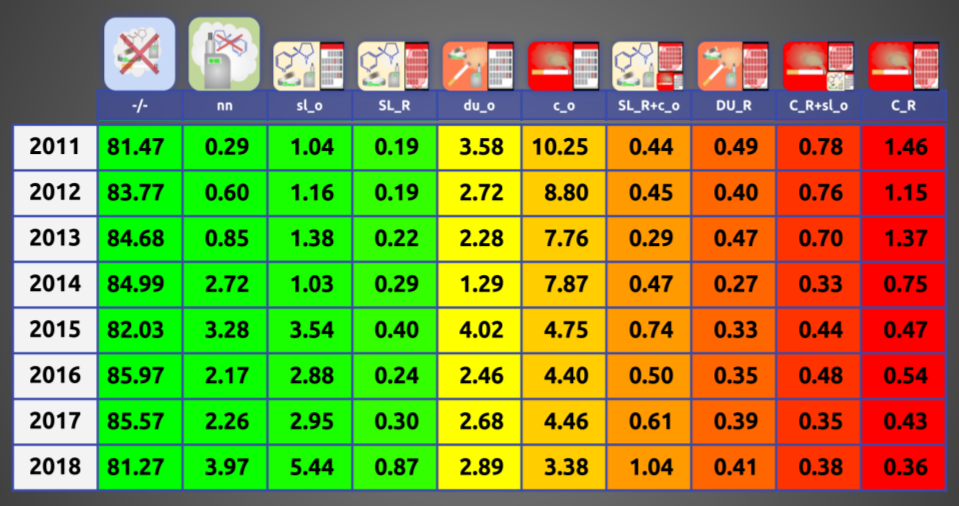 Then you multiply the percentage in each category (e.g. 2011) with its risk factor and sum it up. Now you have a single number, the Total Harm Risk Metric. This number represents the average risk of all participant for physical harm compared to 100% if all were smoking. 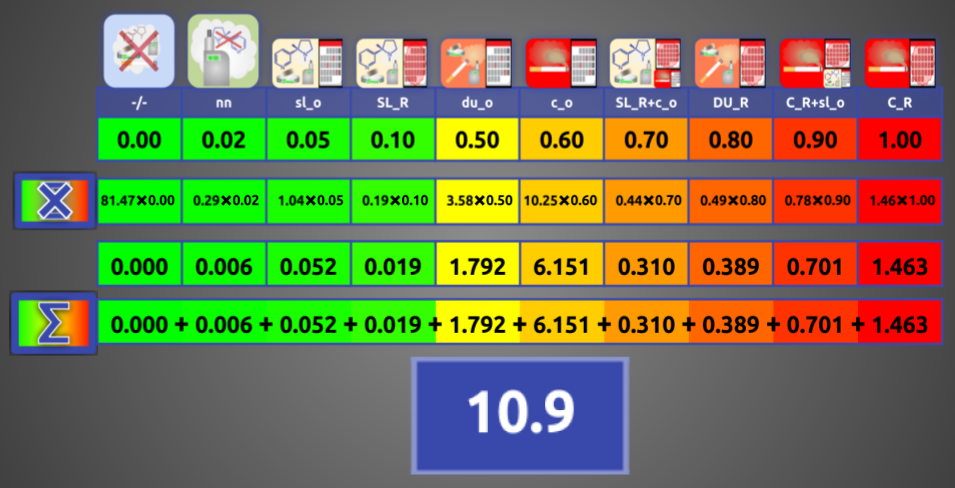 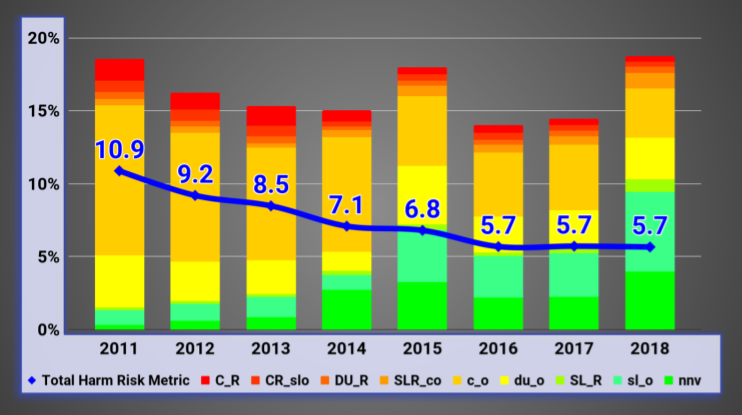 This was part one of video poster #32 presented at the Global Forum on Nicotine (GFN) 2019. The second part is Gateway Matrix Remodeled.

Copies of all the original spreadsheets used for the calculations are available on our Google-drive. You are free to copy them and check my calculations. Downloads work best in "xls" format. A few formulas won't work and some tables are ugly, but they are not relevant for the results. Those are the same.

The summary is in the main sheet:

It contains the links to the sheets for each year, where I calculated the percentages in the categories with all the raw data used:

Each contains these sheets:

I know, there are several limitation in my calculations that should be addressed in a real scientific application of this basic concept, but I wanted to keep it as simple as possible. Here are some:

This Metric could be a useful tool to present an objective overview of the development over the years, but also to compare the surveys of different regions. Currently journalists, politicians, the public, and even scientists only get a confusing hodgepodge of partial results, all too often cherry-picked for its scaremongering potential. I hope that some of the presently available data will be reprocessed this way and future surveys include it from the beginning.